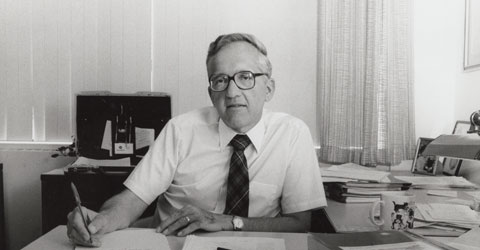 What we now know as the China Project started in a friendship between Dr. T. Colin Campbell of Cornell University and Dr. Chen Junshi of the Academy of Preventive Medicine in Beijing, China. Chen spent 9 months in 1981 in Campbell’s lab, where I also worked, when the basic plan of the study was hatched. Chen then returned to China to work out the organization of the survey while Campbell worked on the funding. One additional important encounter was needed to set the course for this monumental study. (For the details leading up to this point see China Project History: Part 1, and Part 2.)

At this time Richard Peto, a Reader at the University of Oxford, was invited by Dr. Campbell to come to Cornell to give a seminar on his recently published seminal work on the preventable causes of cancer. I learned that a Reader is like a professor in England. I also learned that Peto thought “outside the box,” imagining possibilities that had not been previously considered. When Peto and Campbell met, they hit it off immediately. Peto and Campbell (also not known for painting within the lines) hammered out a simple plan that greatly increased the scientific value of the China Project.

Sitting on the back porch of Campbell’s rural Finger Lakes home one evening, Peto suggested pooling the blood samples. The plan was to go to 2 villages (called communes in the days of Mao) in each county and randomly select 25 men and 25 women between the ages of 35 and 65 to be included in the study. This would make 100 individual blood samples per county. Each of these would have to be chemically analyzed for each constituent of interest. This would be a lot of work, particularly since we were planning on going to about 75 counties.

Peto’s idea was the essence of practicality. Only the average blood values (for example, for cholesterol) from each county were needed to compare with the mortality values from each county. We could just pour all 25 blood samples together for each sex and each village and measure each blood component only four times instead of 100 for each county. This greatly simplified the blood measurements and also made it possible to measure many more components in the blood in these large pooled samples. At that time this pooling was an untried idea scientifically but it proved to be one of the strengths of the China Study.

Meanwhile in China, Chen found considerable interest in the project while talking with colleagues in his institute, at other national institutes and with provincial health authorities. With his personal charisma and organizing skills, Chen was able to put together a number of provincial survey teams that would actually carry out the study. This involved several hundred health professionals who would go from village to village to do the fieldwork. It also involved cooperation from the people responsible for the Chinese mortality statistics and large lab operation to supply the survey teams and create the pools when the blood was sent to Beijing.

In the days before faxes and direct dialing overseas calls, the coordination between Chen and Campbell was difficult. A grant proposal to the National Institutes of Health (NIH), of the U.S. Department of Health and Human Services, had to be prepared with all of the details of Chen’s plan together with the scientific justification for the research and for the pooling scheme and other details. The time difference was 12 hours. There were a number of weekends when Campbell would call in the late evening his time in hopes of finding Chen at home in the midmorning his time. All of this was done through unstable phone lines and language barriers with operators.

A large proposal was put together. With supporting documentation it was about one inch thick. The proposal involved assistance from Peto and Li Junyoa (a Chinese expert in cancer mortality statistics), and several colleagues at Cornell, in addition to the Chinese field teams. For such large proposals, NIH usually selects a panel of experts and sends them for a “site visit” and an assessment of the value of the proposed research. These are always formal and rather stressful meetings because the committee can easily throw the project out for the simplest of reasons.

The meeting was a success, and in due course we got news that the grant was approved. This only left us with the small task of pulling off this unprecedented collaboration. We had logistical, scientific, financial, and cultural obstacles but in the end we pulled off a comprehensive study of diet, lifestyle, and disease in China.