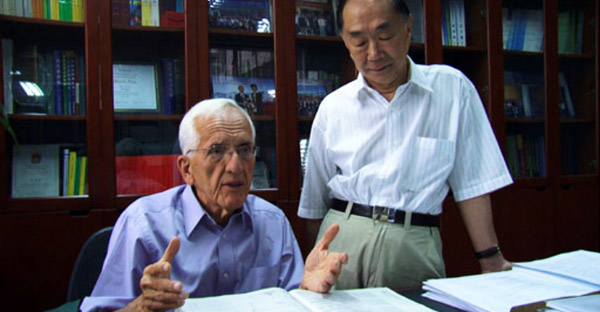 I would like to briefly recount some of the events that led up to the start of what came to be called the China Study. When I first came to work at Campbell’s Cornell laboratory in 1980, our focus was entirely animal research in the effects of nutrition on the events leading to liver cancer. In a typical study we would feed rats a chemical called aflatoxin B1 that caused liver cancer in about 8-12 months. We would then feed different groups of animals different diets to see how specific dietary components (protein level, type of fat or different plant extracts) would affect the early stages of the development of liver cancer (hepatocarcinogenesis).

One day we were eating lunch together in the lab. The practice of eating in the lab has long since been banned for safety reasons but it did engender a sense of camaraderie that is difficult to duplicate in the cafeteria. Campbell pulled out a piece of paper and said that he had just received a letter from a Chinese man working at a toxicology lab in Albany, NY. He was job hunting. This was very intriguing because in 1981 visitors from China were unheard of and Chinese scientists in our field were simply unknown. The lab in Albany was not doing well and this man, Dr. Chen Junshi, was on a fellowship from the World Health Organization and could go anywhere that had room for him and common research interests. Chen (Chinese names are family name first) was interested in the role of the trace element selenium in hepatocarcinogenesis. We all expressed our interest and Campbell invited Chen to join us. I was assigned to be his technician when he arrived and Chen quickly demonstrated his laboratory and research skills. In the course of 9 months he designed and performed 3 studies and wrote the resulting manuscripts, an unprecedented accomplishment. In the process he was amiable, resourceful and unfailingly polite in spite of his technician’s occasional mix-ups and our constant prying into Chinese-American cultural differences.

We learned that as an educated scientist during the Cultural Revolution, Chen, a medical doctor, had the misfortune to be sent to perform medical services in the very remote regions of the very poor province of Sichuan. In a classic case of making lemonade out of his lemons, Chen helped organize a study of an unusual disease unique to that part of the world, Keshan disease. The non-infectious condition involved deformities of the heart and a nutritional cause was suspected. Chen’s group hypothesized that a lack of dietary selenium was partially the cause. It was known that selenium levels were very low in the soil and plants in that region, but no one had yet shown that selenium was a necessary nutrient for humans. In a landmark study they showed dramatic improvement of the heart condition through supplementation with small regular doses of selenium. This study is now known as the final chapter in the study of human essential nutrients (vitamins and minerals). No new essential nutrient has been discovered since this study was published in 1979.

In our discussions in the lab, both small and large disclosures showed us some of the cultural differences. In the course of some lab work one day I told Chen to use a twist-um to close a plastic bag. He asked what a twist-um was and was quite intrigued by the paper and wire device. Chen was a voracious reader. Mysteries were his favorite. I would supply him with 2-3 a week from local yard sales. One day in a moment of cultural “unthinkingness”, I gave him 1984, Orwell’s novel of futuristic political tyranny, to read. He returned it the very next morning and thanked me for the book politely but said that he did not need to read it since he had already lived through it. Then there was the day he discovered Saran-Wrap. Another day a lab tech returned from the New York State Department of Motor Vehicles and was grousing loudly about the bureaucracy. (Aren’t all DMVs the same?) We asked Chen if there was much bureaucracy in China. After ascertaining the meaning of the term, he let us know with a few deft hand movements and a wincing shake of the head that he was extremely and painfully familiar with cruel and dehumanizing bureaucracy. No one felt like following that one up.

After this all but too brief sojourn, Chen returned to China. In his last few days in our lab he and Campbell began discussing possible future research collaborations once he returned to China. The discussions focused on the possibility of studying the intakes of selenium all over China and comparing this with the prevalence of cancer in China. This was the start of the China Study. A few key pieces fell in place through our English and other Chinese colleagues. However, the initial idea and the heart of the project were based on the excellent personal and professional relationships that were forged during Chen’s enlightening visit in our lab.