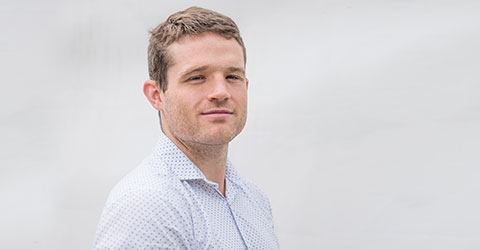 From Scared School Boy with MS to Doctor of Nutrition

It was a few days after Christmas in 2002. Aged 15, I was a fit, strong and ‘healthy’ teenager. I was in third year of secondary school in Ireland which is a state exam year and therefore the sport season for my school year ended before Christmas.

I was keen to maintain and improve my fitness and strength. Unlike a normal teenager, I didn’t get clothes or CDs for Christmas…I got an aerobic stepping machine! I reasoned that this machine would increase my leg strength without straining my already injury prone knees too much. One evening, I decided to test out the machine…doing the equivalent of 10,000 steps. Then I sat down to a turkey sandwich with all the trimmings to watch some Christmas TV with my parents and two sisters.

The next morning, I woke with a strange sensation along my entire left hand side, including my upper body. I reasoned that I had merely overdid it on the stepping machine. Over the next few days, my physical state deteriorated until we eventually went to our local, small town hospital. It was New Year’s Eve. The initial tests involved an ECG and some reflex examinations. I was immediately referred to a larger hospital in Dublin. The hospital suggested an ambulance but my parents opted to drive me instead. I arrived late in the evening and after the usual admitting questions and examination I ended up in a CT scan at 11:55PM…my parents and I spent midnight on New Year’s in a brain scanning unit! I was placed in a brain surgery ward to await the next step. Over the next two weeks I slept for 15-20 hours per day. My physical strength was gone to the point where I could barely walk and couldn’t lift my arm above my head. The rounding consultant discussed surgery in my case with his colleagues at my bedside. However, a junior doctor thankfully suggested a brain MRI scan as another option. I got the scan, not the surgery and was moved from the brain surgery ward to a general neurology ward.

The hospital had a minimum staff over the holidays and the new ward was empty…it was opened just for me! My warm welcome was a lumbar puncture (or spinal tap). This involves a six inch needle being inserted directly into your spinal cavity to extract some spinal fluid.

During my two week stay, I received five days of high dose steroids and multiple other examinations. Upon discharge I was referred for extensive rehabilitation therapy, including physiotherapy and speech therapy. I had learn how to walk again, how to tie my shoelaces again and much more. I started to regain my strength but it was a slow process with intensive effort from me and the therapists.

15 years from my first symptoms, not only am I walking, unaided, I play sports, lift weights and maintain a hectic lifestyle. Since 2003, I’ve had no symptoms, no relapses and no medications.

Three months later I had severe facial symptoms which did not require hospitalization. Five months after these facial symptoms, I had symptoms on the right side of my body. This time I was sent to the hospital and underwent similar examinations to my first attack. I spent another two weeks in the hospital (on the same ward as my dreaded lumbar puncture) and again, I was treated with steroids for five days. After three separate attacks, all within eight months as well as the findings from the examination, scans etc….I was diagnosed with multiple sclerosis (MS).

Minutes after my diagnosis the medical team were discussing starting injections 2-3 times per week…for life. All I could think about was sports and girls! How would this affect me and sports…and girls! I left the hospital with more questions than answers. At this time, access to information about plant-based nutrition was not as easy as now – The China Study book did not exist and there was no Center for Nutrition Studies. I was told to be cautious with where and how I got any information on MS. So I started my injectable medication three times per week and did not look further. However, the injections (interferons) caused side effects…sore muscles, poor sleep, flu-like symptoms – none of these were ideal for school or sport…or girls. I was miserable on the injections and after a few short months I decided to stop taking them. Nobody agreed with me but I was feeling so bad I thought there must be an alternative. I was always interested in nutrition but more from a sports perspective than disease prevention/treatment.

I decided to start reading about nutrition and MS. I got every book I could find in my local library and read them all while taking notes. However, I had no concept of evidence or science. Many of these books were written by non-clinical individuals and contained lots of advice but little science or evidence.

I decided to study nutrition in university and applied for a place on the only dietetics course in Ireland: Human Nutrition and Dietetics at Trinity College Dublin and Dublin Institute of Technology. I was delighted to be accepted and could not wait to pick the brains of my lecturers and professors. I asked one lecturer about MS. They brought me to their office and did a quick online search before printing off some studies for me. These studies were all on antioxidant supplements (and did not have very impressive results).

Then I read a tiny four sentence paragraph on the back page of a health supplement in the Irish Times. The article referenced a book which was based on a study which had been referred to as the Grand Prix of epidemiology. I knew this book was worth reading. I ordered this book immediately and read it cover to cover…this life changing book was The China Study.

Excited but confused after reading the book, I asked several of my nutrition professors had they heard of The China Study. One professor looked at me blankly and said, Conor there are many studies in China! There is a small section in The China Study which refers to MS but for me the entire book was fascinating and eye opening and the third section dealing with government and industry influence blew my mind. I immediately adopted a whole food, plant-based diet and began to think about nutrition a little different. Suddenly MS didn’t seem so scary…

That was 2006. Since then, I’ve completed my dietetics training/degree and went on to complete a PhD in Human Nutrition at the School of Medicine and Medical Science at University College Dublin. I have published 15 articles in scientific/medical journals, presented my results at conferences worldwide, winning numerous prestigious national and international prizes and most recently joined the team at the Center for Nutrition Studies.

On paper, MS is a chronic, degenerative disease. This means it is incurable and gets worse over time. It is estimated that only 50% of those with MS will be walking unaided in 15 years following disease. 15 years from my first symptoms, not only am I walking, unaided, I play sports, lift weights and maintain a hectic lifestyle. Since 2003, I’ve had no symptoms, no relapses and no medications. I believe that nutrition plays an important role in my own MS and MS in general. The science continues to support this opinion with new studies observing a detrimental effect of high fat meats and dairy products, while other studies support the benefit of a whole foods, plant-based diet. Give it a try, you have nothing to lose and lots to gain!